Well, our wheat harvest has finally begun think this is the first successful winter crop that we’ve had since Clinton & I returned to the farm back in 2005.  Last year’s chickpeas were a massive failure. (Clinton had much pleasure in burning them once they dried off!)  So it is a refreshing sight to have a beautiful, golden crop of wheat in our paddocks.

Georgie & I had to go over & pick up a sample of grain out of the header to take to Mt Tyson to be sampled, so whilst we were out & about on the farm I decided to put my camera to use & take some photos of the harvesting in action.  I guess things that seem everyday actions to us may not be so to others!  I’ve come to realise that I need to be documenting what we do on the farm – not just to share, but also so we remember what we were doing at the time.

The first paddock has been completed & now they are onto the second, with one more after that.  All up we have about 123ha to harvest, not much, but with cotton & sorghum in the ground as well we’ve no fallow (areas of paddock without crops in them) left this year.

Wheat was once the main crop grown around this area, but with the introduction of ringtanks capable of storing large volumes of water & changes in seasons, summer crops, in particular cotton, are now the norm. 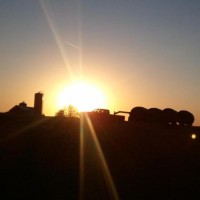